What is the Elo Ranking System and How Does it Work?

He is the physicist that created this ranking system. Hence the name “Elo rating system”. Yes, Arpad Elo was a Hungarian physicist who is best known for being a chess master and the inventor of a much needed rating system for chess.

Now, to the technical stuff.

The beauty of Elo’s ranking is that it tells us exactly how much a player’s rank should change. It does this by asking the following questions:

Next, we use the formula with the chart below to these questions. This is a simplified chart for educational purposes. 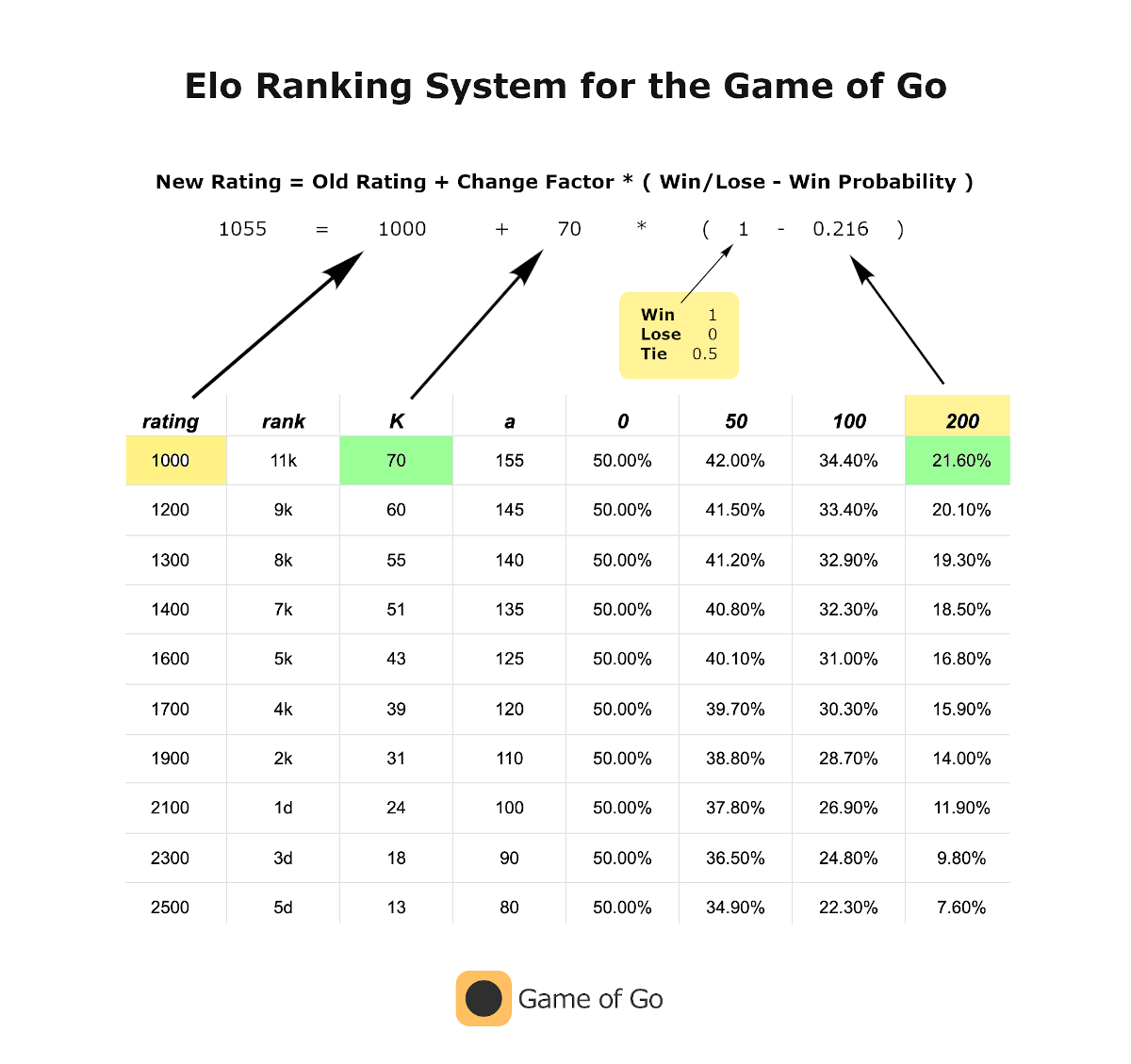 As you can see in this image, Kims score changed to 1055 because she won against Joe when his score was 200 points higher than hers. This means she had a chance of 21.6% at beating him. If the Win/Lose is 0, then your score will go down.

The Dan ranking system was created for Go in the late 1600s by Hon'inbō Dōsaku, a professional Go player. It later expanded into forms of martial arts like Judo, with the “Dans” corresponding to the color of the belts.

In the chart above, the “k” and “d” in the rank column denote "Kyu" and "Dan". Simply put, Kyu means beginner or casual player, and Dan means amatuer or professional.

It’s important to note that Elo rankings are always relative to the community one is playing in. Meaning that if you are an amatuer playing in a beginner community, then your rank will be inflated above what it would be inside a real professional community.

However, there are some issues with this ranking system.

First, it is possible that in order to maintain their rank one might stop playing, so they don’t keep putting their rank at risk. In the Game of Go, we account for this with activity bonuses for playing each week and inactivity penalties for playing less than one game per month.

Second, if you only play against people you are worse than, then your score will keep going down. Contrarily, only playing against worse players will make your score go higher than it should. For this reason, it is best to keep being matched with players near and above your rank. We account for this by only allowing ranking for 5 consecutive games against the same person. After that you need to play someone else to change your rank.

Last, average rankings change over time. So, if 10 years ago there were much worse players then the ranks would have been inflated relative to the natural average of ranks. Because of this, we try and get as many people playing Go as possible!

Finding Out Your Rank

There’s only one way to find out. Play several games against a variety of different players with different ranks. Over time, after 10 games you may start to get a feel for where you stand. After 100 games of playing various ranks, you should have a good idea of how you actually rank.