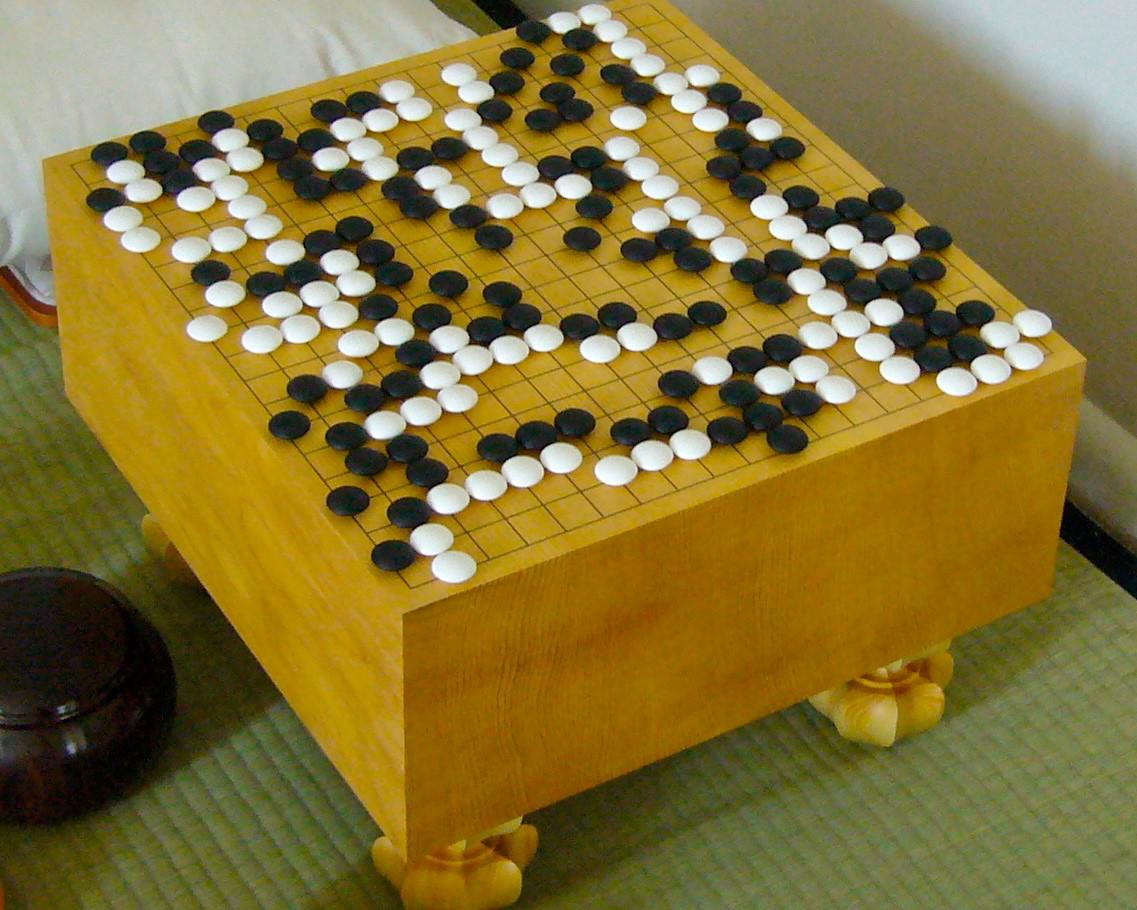 How Are Go Boards Made?

If you love the game of GO then you’ve surely noticed the amazing boards that are being played upon in the East. With their beautiful natural wood grain and stain finish, GO boards look more like a piece of artwork than a simple board game. GO boards can feel like purchasing a piece of artwork as well, ranging from prices of $5 to over $1,000,000 dollars a board! For serious players having the perfect board can be just as important as having the perfect opponent. Over time GO boards have taken on major cultural significance. 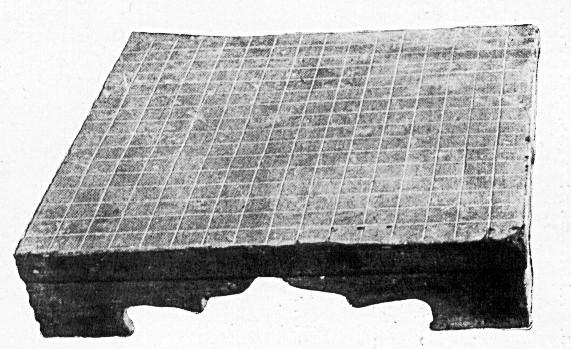 Although GO boards can be made from literally any material, they are traditionally made from a single piece of hardwood. Commonly GO boards are made from a type of agathis wood, an evergreen tree stretching back to before the cretaceous period, which tends to grow in the southeastern hemisphere today. As all things ancient, still in use today, the GO board has taken on many iterations over the millenia. GO boards used to be primarily made from stone, with a 17x17 grid (as pictured on the right a 2000 year old 17x17 board). Eventually the standard 19x19 board took its place. It is theorized that the switch to 19x19 sized boards from the original 17x17 grid was to reflect the four seasons of the year. 19 times 19 is 361, very close to the number of days in a year and having 90 cross sections in each corner per each of the four seasons.

The standard GO board is 16.5 inches wide and 17.5 inches long. Chinese boards are generally square. However Japanese and Korean GO boards are not typically square as it creates a more aesthetic view of symmetry when seated from the normal playing position. GO board dimensions are very precise. Board thickness is 5.5 inches. With line spacing width at 0.87” and 0.93” for length. Line thickness at 0.15” and the six star-point’s diameter at 0.9 inches each. GO boards can be made in 19x19, 13x13, and 9x9 grid.

The Goban (碁盤) is the traditional Japanese name for the GO board. To make a goban artisan wood carvers must study under the tutelage of a master goban wood carver before being qualified to craft a board alone. A goban maker may spend hundreds of hours perfecting a board. Japanese boards are often made from the wood of the japanese Kaya tree. Kaya is the prefered high quality wood for a good goban. Because kaya wood is becoming more rare a kaya goban can be very expensive. The color and texture of kaya wood for GO boards creates the most desired aesthetic appreciated by players most. 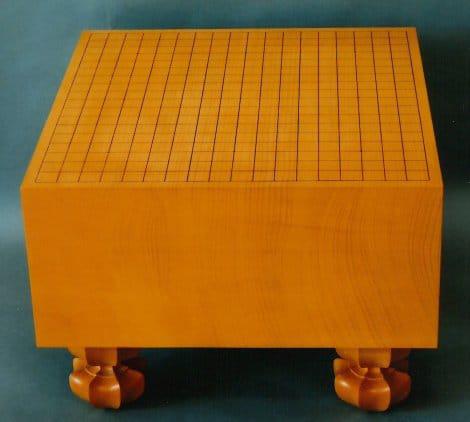 Some goban makers use samurai swords to draw the black ink lines on the boards; a skill which requires great precision and timing. These master goban makers will seek out the best kaya wood for their gobans, using kaya wood from trees over 700 years old. These exquisite ancient trees will have their wood classified by the style of different grain types for goban production. As times change other types of wood have been sought out for goban use.

The Chinese Weiqi Board

The oldest known surviving GO equipment is a board carved from rock that dates from the Han Dynasty in China. Weiqi, as GO is originally called in China, has been around for a very long time. It was common for weiqi boards to be carved from stone. Fortunately for us many ancient stone weiqi boards have been discovered shedding slight insights on this mysterious ancient game. Pictured on the left is the oldest 19x19 grid weiqi board ever discovered, dating from close to the 1st century. 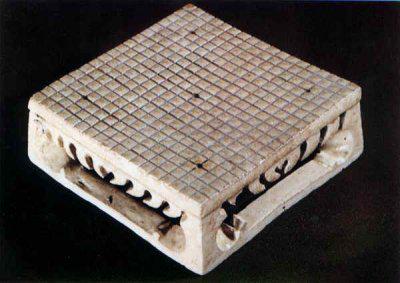 Although most Chinese weiqi boards are made in perfect squares, weiqi boards have a great variety of shapes, styles and materials. Some are even carved from stone still. Similarly to the plethora of chess board varieties in the West, China enjoys stretching the boundaries of weiqi designs. Being the source of GO, China naturally feels a sense of ownership over weiqi; ignoring the international standards of GO board design, and even refusing to call GO by any other name than weiqi. The international GO competitions tend to stick to the traditional table top goban style boards. China seeks to create their own weiqi association league and take the lead for international standards of GO competition.

The Korean Baduk Board

As in Japan and China GO board production is big business in Korea. Go is called baduk in Korea, and has an almost fanatic following with famous players given stardom status. The korean baduk board is very similar to the Japanese goban in style and shape. Baduk boards are often made from the wood of nutmeg trees, which can have amazing grain patterns and a powerful incense aroma. Wood for baduk boards can sit for over ten years curing before finally being used to make a board. On the underside of baduk tables is a notch that is traditionally carved. 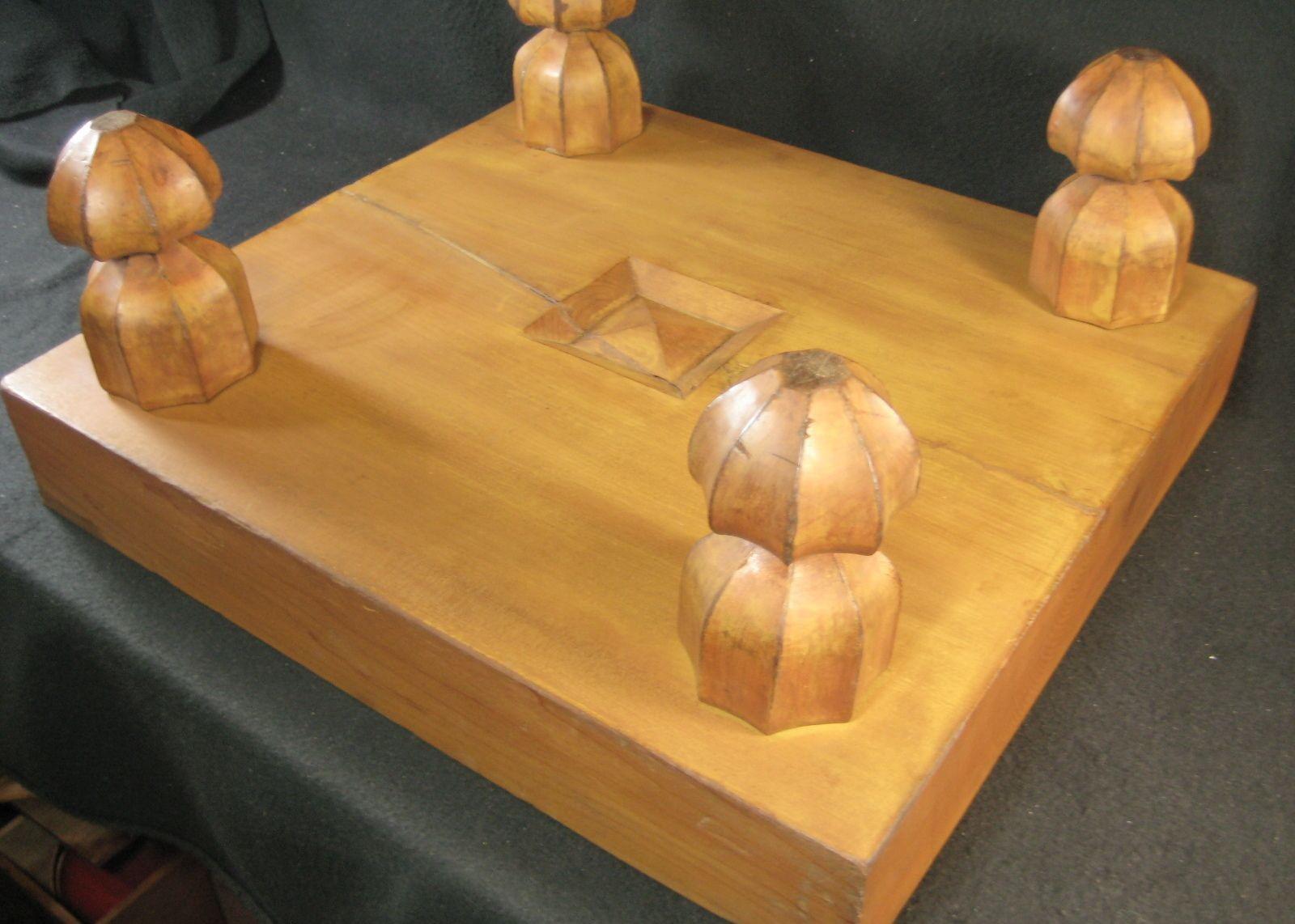 Underside of a baduk table board with legs. Revealing the mythical notch. 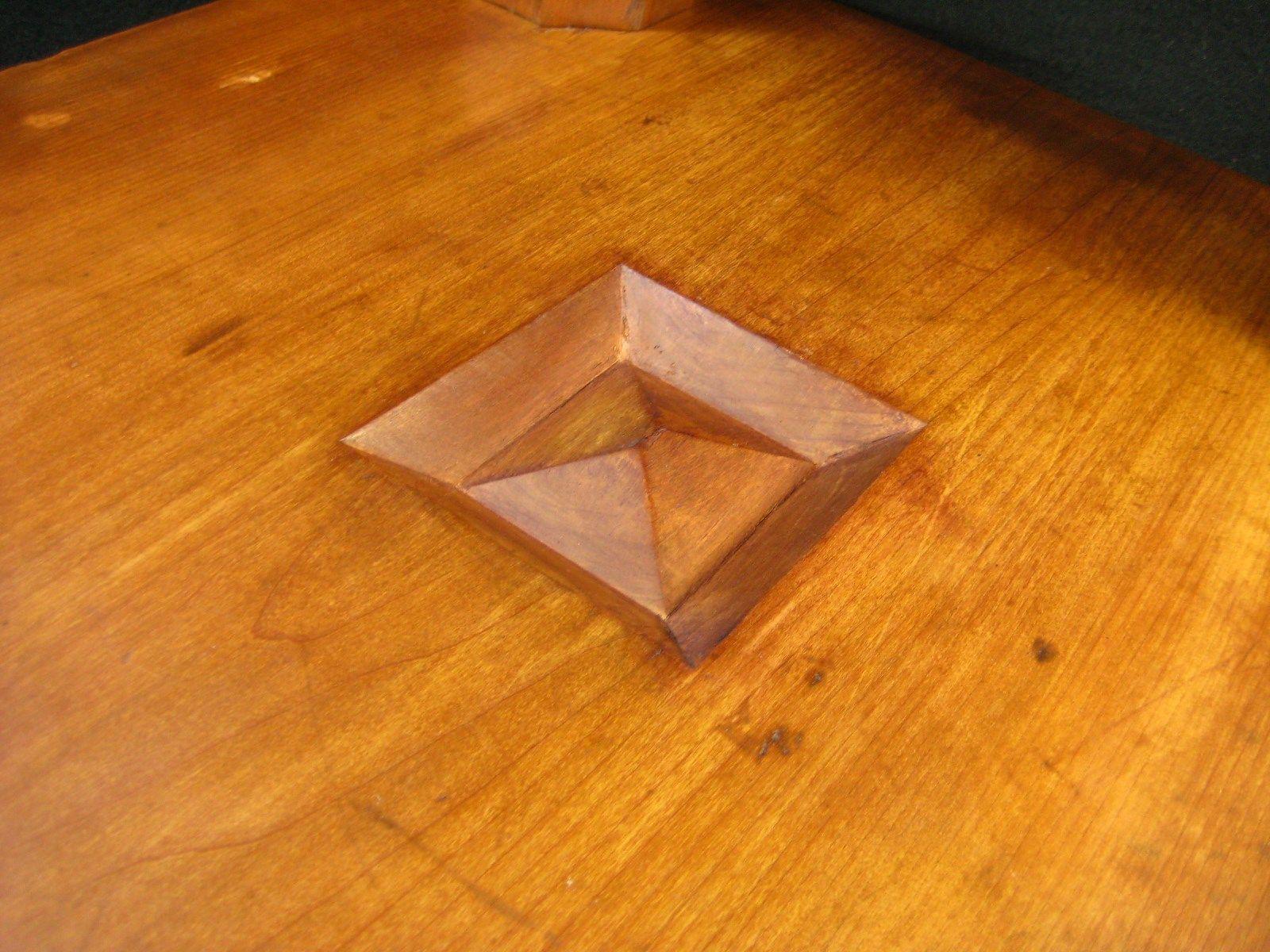 The notch is not entirely known for what the purpose of it is. Some think it helps with the pleasing sound of a stone being placed on the board. A myth suggests it was used to spill the blood upon, of any would be cheater or violator of baduk decorum. Many craftsmen of baduk boards have their signature styles and trademarks they like to add to a board, to add a subtle makers-mark of their craft. It could be that the notch is an ill forgotten hangover of an unknown baduk board maker's craft signature.

But that's just a theory.

The American GO board

The American GO board is a newcomer to the GO world. One simply glues four chess boards together and uses checkers pieces for stones; even though it is only a 16x16 board it does the job, but who’s counting anyway. Joking aside the American GO community is in its infancy. In time we will surely take to GO just as the Japanese and Koreans took to weiqi centuries ago. GO so far has been a huge influence on Western computer science.

AlphaGO, Google’s Deepmind GO playing computer algorithm which made a splash in 2016 defeating Korea’s world champion master baduk player Lee Sedol, is built in silicon and transistors. So far the West’s contribution to GO board history has been mostly built from the digital wood of neural-network trees, grown mostly in Silicon Valley. As the future accelerates towards us we may be seeing more of these digital GO creations in our lives. To help speed the process along digital options like The Game of GO app exist to help bring players together. 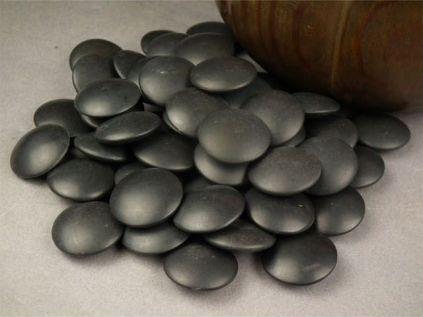 A fair discussion about GO boards must also include a paragraph or two about the stones and bowls. The traditional GO board uses white and black stones to play with. Technically only the black stones are made from stone, a form of dark black slate. While the white stones are actually made from white polished clam shells. Slate and clam shell stones can be very expensive as well. Each stone is carved and polished by hand and meticulously mulled over for the most subtle desired aesthetic. The stones can be very beautiful when complete, and add that perfect literal touch of placing the stone on the board with the feel and sound that only a GO player could fully appreciate. A more affordable option for stones are made from colored glass. 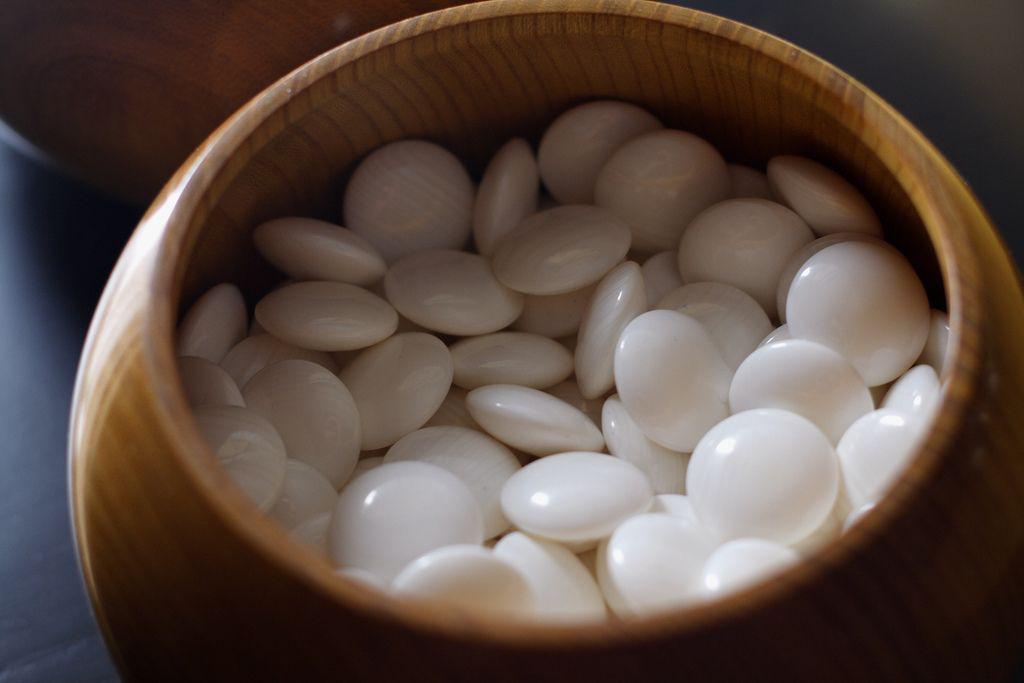 As for the GO bowles which usually contain the stones, they are often made of the same material as the GO board is made from. The GO board maker will spend comparable focus on the grain and beauty of the bowls. Making each bowl to fit the beauty and personality of their GO board.

So how are GO boards made? With care and focus, precision and imagination. Considering that many GO boards come from millenia old trees, it is fair to say that the making of a proper GO board can take a thousand years. Very suitable for a game that is older than known history. The aesthetic of the sweet smell of a nutmeg wood board, with the feel of slate in the fingertips, and the sound of clam shells hitting the board, it goes without saying that the love of GO is more than strategic.

Have a Good Game.